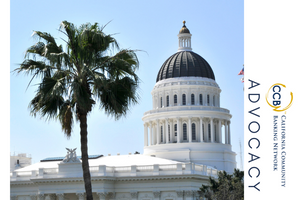 2022 saw the most legislative activity since prior to COVID in 2019.  Over 1,100 bills made it to the Governor’s desk and he signed over 85% of them, including several bills that will have an impact on community banks. The 2022 legislative session concluded at the end of August, followed by the Governor’s bill signing period in September.  CCBN had a very successful year and was able to either mitigate or kill the overwhelming majority of the bills we opposed.

Stopped Proposal to Create a California Community Reinvestment Act
One of our biggest victories this year was mitigating SB 1176 by Senate Banking Committee chair Monique Limon, which sought to create a California Community Reinvestment Act.  Banks, credit unions, residential mortgage lenders, and money transmitters that sell or issue stored value would have been covered under the state CRA and would have had a "continuing and affirmative obligation to meet the financial services needs of the communities where they conduct substantial business.”  DFPI would have been charged with regulations and oversight.

CCBN had several conversations with the author’s office to explain the problems with the bill, and ultimately the author decided to amend it to remove the mandates on banks and instead create a study bill examining a potential state CRA in the future.

Killed Super Lien Proposal
AB 870 by Assemblymember Miguel Santiago (D-Los Angeles) would have given the state the authority to place super liens on properties to cover costs associated with hazardous waste. The bill was among several pieces of legislation in recent years introduced in response to waste from the Exide Plant in the City of Vernon.  CCBN and other financial services groups successfully advocated against the bill, resulting in the author pulling it from consideration

Mitigated Debt Collection Legislation
SB 975 by Senator Dave Min creates a new civil cause of action for debtors who claim to be victims of coercion of debt.  CCBN, along with other financial services industry stakeholders, worked throughout the legislative process to secure numerous amendments to the bill to make it less onerous for lenders.  SB 975 creates a non-judicial process for relief for debt incurred in the name of a debtor through coercion.  Notably, it also mandates a judgment against the perpetrator of the coerced debt in favor of the lender when the debtor establishes by a preponderance of the evidence that a debt(s) was coerced, and when the perpetrator has been brought within the jurisdiction of the court. CCBN was part of the coalition that successfully advocated for this provision in order to ensure there is a process for perpetrators to be held liable, and also advocated to ensure SB 975 only applies to unsecured consumer loans, e.g. household purpose loans. Due to our coalition’s advocacy efforts, the new law DOES NOT apply to secured loans nor loans made for commercial purposes.

Curbed an Overhaul of Judicial Foreclosure Process & Secured Amendments to Bankruptcy Exemption Expansion
CCBN worked within a coalition of other financial services stakeholders against SB 1323 by Senator Bob Archuleta, which would have made significant changes to the judicial foreclosure process by allowing trustees to sell homes without a homeowners consent.  Just weeks before the end of session, the author decided to drop the bill due to our opposition.

CCBN also worked to secure amendments to SB 1099 by Senator Bob Wieckowski, which makes a series of modifications and expansions to existing bankruptcy exemptions that benefit wealthy debtors.  After several negotiations, the author agreed to amend the bill to reduce the amount of the auto exemption increase in the bill from $9,500 to $7,500.

Helped Pass AOCI Opt-Out Conformity
CCBN worked with the California Bankers Association in support of SB 1498, which contains language conforming California law with federal law with respect the federal authorization for banks to opt-out of the requirement to include all components of accumulated other comprehensive income (AOCI) when calculating common equity tier 1 capital.  In other words, SB 1498 creates parity between state and federal law given the fact that California law, until this bill, did not recognize the AOCI opt-out election when calculating tier 1 capital pursuant to loan to one borrower limits.

Looking Ahead
2023 is the first year of a new, two-year session and will be ripe with both opportunity and challenges.  Over 30 new legislators will be sworn in after the November General Election, and Democrats’ supermajorities could grow even larger.  CCBN will continue to be actively engaged in Sacramento next year to protect the interest of community banks and foster relationships with new and existing lawmakers and regulators.